My running and triathlon journey

‘Yeah, you can run, not a problem.’ Said the doctor. This is the doctor who used to live in my house. Well let me to you this Scott! Yeah I remember your name! I will find you. I will hunt you down and I will make you fix me so I can run properly again!

Liam Neeson ain’t got nothing on this injured runner!

But. I’m not even injured. That’s the worst of it. This thing is in there for at least 3 years. If it comes out earlier it means they are putting something else back in. And it’s that that I am trying to avoid.

I tried my first run 4 days after it went in. I didn’t even make it to a mile before I stopped. My sports bra kept rubbing against it and it looked like the wound was going to split open. There was lots of stopping. My planned 4 miles turned in to just over 2 and my other half found it very difficult to go at such a slow pace. When I got back I sat outside fighting back the tears from both the pain and the frustration.

The next day I bandaged it all up, changed my sports bra to a more adjustable one (Brooks, bought at Loch Ness Marathon) and set off by myself – nothing but pure determination forcing me forward. There were still multiple stops so I could wince and grimace but it was slightly better. I managed 4 miles but admittedly that was too far. It was too painful to do anything the next day.

Wednesday I went out again. I set off and just as I hit the first mile I was smiling – it didn’t hurt as much! This I could handle! 2 miles clicked by and still I was ok. Then just as it hit 2.1 it must have moved or something because all of a sudden it was painful. It feels like there’s a solid box only being held up by a thin layer of skin bouncing away on my chest. For someone with no chest, this isn’t a feeling I’m used to! By 3 miles I was considering phoning to get picked up. By 3.5 I had stopped completely – finger hovering over my phone. Was it time to admit defeat?

But it hadn’t hurt at the start – so surely that means it’s getting better? I set off really slowly, face completely screwed up in pain but determined to get myself home. I very carefully chose songs to listen to that I knew would help me – and I got home. 5 miles done.

The next morning my friend Lorner was going out so I joined her. She’s skipped a few runs lately for her own reasons so we both knew we were going to be slow. It wasn’t a great performance and again there were stops but it was good to chat. It was easier at the slower pace too. I still couldn’t really manage anything that resembled a decline (which surprisingly seem to be absolutely everywhere now – when did that happen?) but it was good, even better with a friend. 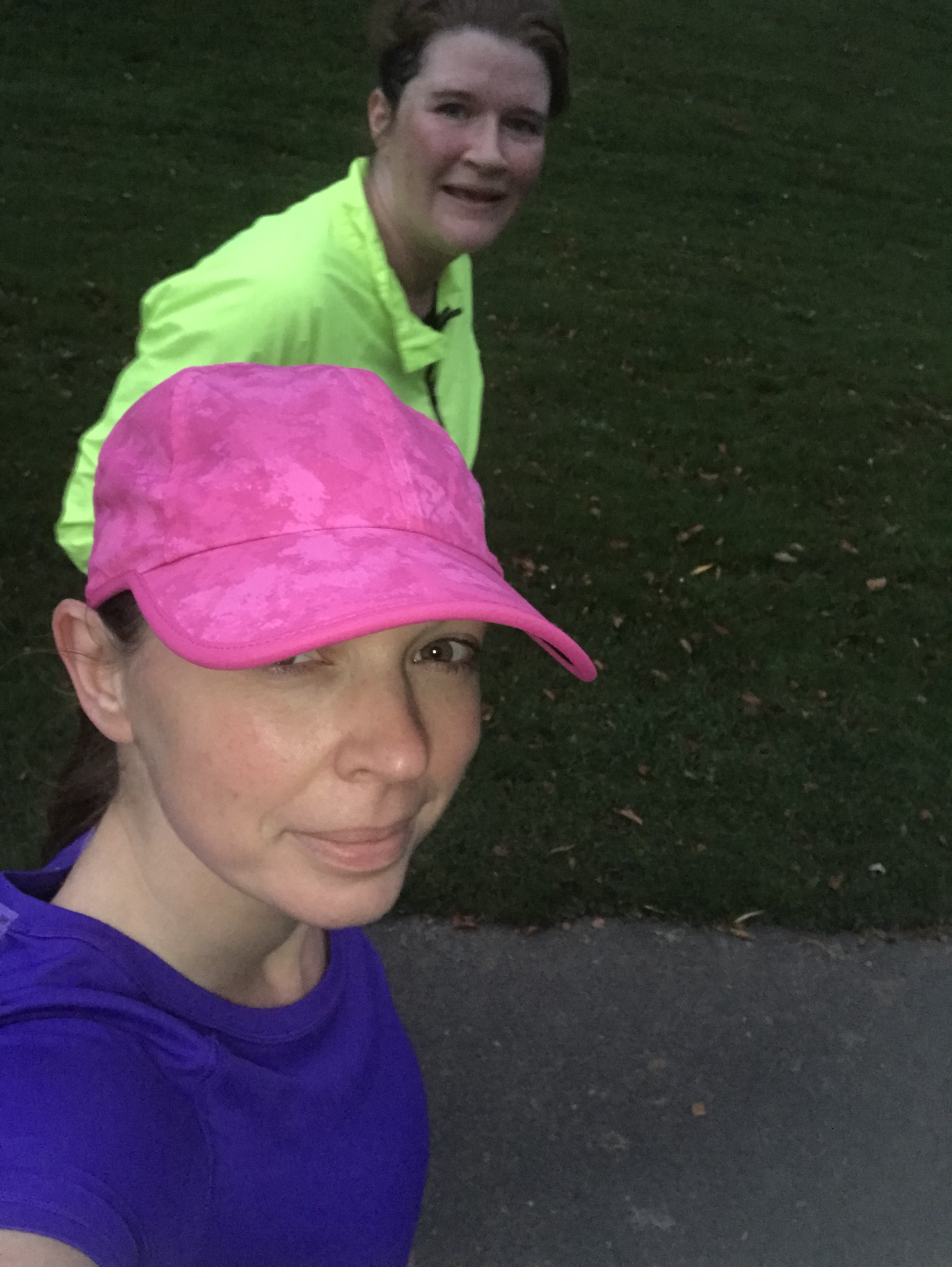 Then there was Parkrun. A simple 5k – or at least it used to be a simple 5k. I knew it was going to be a test. I had to start further back, not try and go out fast, just relax.

I gave my keys and jumper to Lorner who was volunteering with her eldest (how awesome are they?) and went mid way in the pack. I think I got to about 400 meters in the run before the claustrophobic feeling started to cave in on me and there were just too many people. I sprinted through resisting the urge to flap my hands and scream ‘get away from me!’.

It wasn’t a great idea.

I charged through the massive puddle and had a giggle to myself. I swear water is out to kill me! Thankfully, this time, no water wings were needed – I was going too fast ha ha.

Shortly after I felt a tap on my shoulder. It was Brian who often comes down with his dad. We chatted a little but I had absolutely no spare breathe and he quickly went on ahead. I’ve found my runs this last week have been hard both on the chest thing and also on my breathing – I’m not happy about this. I can’t afford to lose what I’ve gained when I haven’t hit my 3:45 on a marathon yet.

There’s a trail section at Perth Parkrun and if I’m honest I’ve never been a fan of it. I just can’t seem to get any speed on it. It certainly wasn’t happening now. I couldn’t clutch my chest because I needed two arms to prevent me falling (how do people run with a broken arm? I’ve seen it many times, but, how?). Holding my chest alleviates some of the pain as I can ‘hold’ the monitor and prevent it from bouncing. So it hurt like a mother f@cking b!txh at this point!

Teeth well and truly gritted together I stumbled my way back to the path. There’s a very, very slight decline as you come back on to the park further on and at that point I almost had a screaming match. If it hadn’t been for the massive puddle which I could take my frustration out on (think Rihannas video to Umbrella but more Tom Holland’s version!) I would have called it a day. 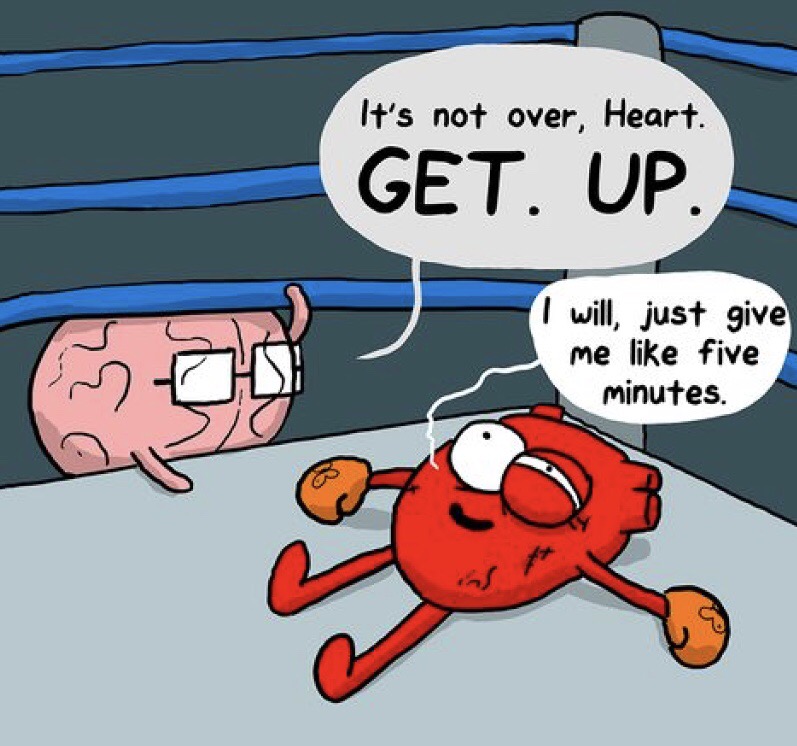 Finally across the line and Lorner gave me my finisher token. I didn’t even look her in the eye as I could feel the bloody tears starting to roll down my cheeks. It wasn’t even a fast run!!

Gillian came over to say hi (and check I wasn’t about to drop down dead haha) and we chatted about her recent marathon and her new found love of coke. First ever marathon and she absolutely smashed it! I need to start chasing her when this settles! Get my elusive 3:45! (She was way under that by the way!)

And it will settle. I know this. But no, I do not have patience for it. I have a half marathon next weekend and for the first time ever I honestly don’t know if I can do that distance. Hand on heart it will be touch and go if I make that finish line.

But at least I still have a sense of humour about it. (See what I did there? Hand on heart? Heart is the problem I have?).