My running and triathlon journey

Last Thursday’s club session was replaced with their annual Duathlon.  I had hoped the other half would be interested but he said he wouldn’t be back in time to change and get ready. I hummed and ha’d then decided if I can do a triathlon I can do a duathlon and the only way to get to know people in the club is to to actually go to events (kind of a key part!).

So, Thursday night I wolfed down a bit of food, got the bike in the car and headed off repeating the directions over and over so as not to get lost.  I parked up and walked over to the group, slightly hovering around the woman with the clipboard who was clearly taking registrations.  She took my name and I recognised her instantly as one of the marshalls you ‘heard before you saw’ at the Brig Bash 5 – fabulously enthusiastic!  Fiona came over with a warm smile and bright yellow jacket on – she was one of the many marshalls – and went over the route for me.  I was with her as far as ‘you start here and turn right just up there’ then I was lost.  Good thing I will never be out front in a race!

All registered and with my bike at the side we had a little debrief.  Yes it was a race but it was also for fun.  We don’t own the road so be careful.  There are lots of marshalls so you shouldn’t get lost (I felt this was slightly tempting fate but time would tell).  We shuffled to the starting line and someone asked me if I was doing it all myself or just running (we had the option to enter as a team).  I said I was doing both and asked her the same – ‘oh god no I’m just running’.  I asked if she knew if there were many females doing both and her reply…

‘I think you’re the only one’.

Genuinely almost broke my neck with the speed I twisted round to face her.

I was busy picking my stomach up from the floor.

If you can’t laugh at yourself though what can you do.  Turns out there were about 5 of us female varieties putting ourselves on the line and going for both.  Why not.

I started off not too bad, it was a LOT steeper on hills than I thought it was going to be.  In fact, when I got half way I glanced at my watch only to realise I was only 1.5 miles in! The run was 4.2miles, this did not pose well for me.  However I kept my head down and my eyes on the woman in front.  She was wearing a cycle club top so process of elimination – she was a cyclist! (Proper Sherlock Holmes I am).  Hmmm, I wonder if I can get past her?  I’ve always been told focus on the person in front and make them your goal to over take and you’ll be across the finish line before you know it.

I’m fine where I am thank you.  Be your own competition and all that.  Run your own race not someone else’s, and all those other sayings etc.

Then came a bit of a down hill.

Ok, well, maybe.  Very, very, slowly I started to decrease the distance between us.  This quite possibly was more down to her slowing down than me speeding up but the fact remains, I was gaining on her. She was quite clearly going to whip my ass on the cycle route but at this moment in time it was all about the run.  On I went and about half a kilometre before the transition line I did it! I had focused on the person in front of me and I had made myself get past them! Wa hey!

Naturally the minute she was on her bike I blinked and she was gone. Not even a cloud of dust, just, gone.

The cycle was 2 loops of another steep hill and was 12.2miles.  I cycled as hard as I could, I have what I like to think is a decent bike, I’m just not that great a cyclist yet.  That will come with time though.

I finished in 1hr 24 I think, quite far down the field but it was never about being ‘top 3’ or anything.  Everyone was in a great mood at the end despite being eaten by the dreaded midges but there was cake.  I’m pretty sure at every Road Runner event there is cake!  I’m certainly not going to complain about that! 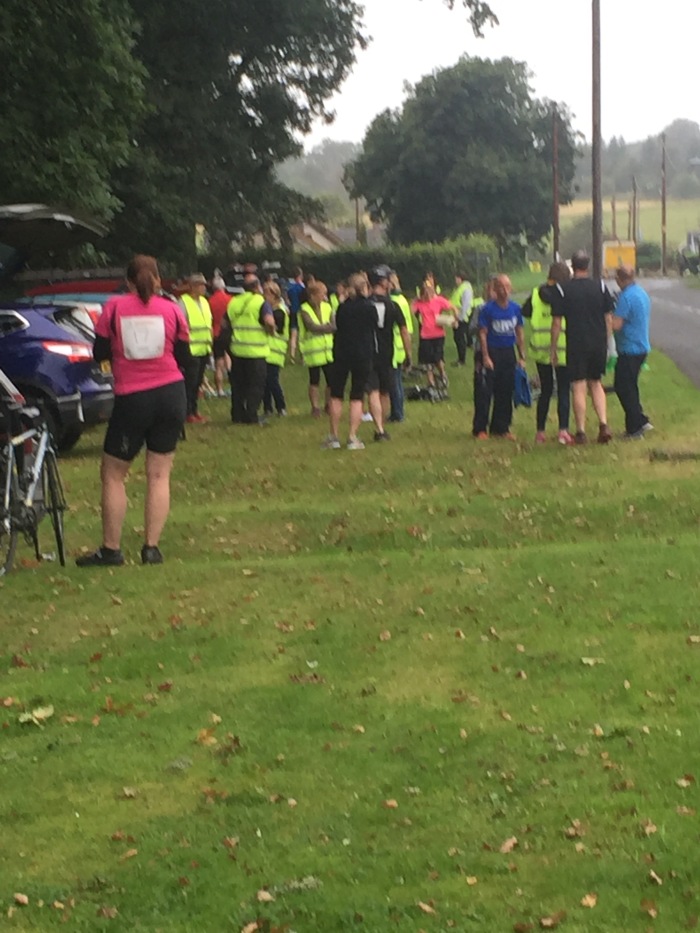 Now I’m focusing on the Great North Run in 2 weeks and Loch Ness Marathon in 4 weeks.  I’ve had a great weekend this weekend but more about that later 🙂